Jesus and the Miraculous Catch of Fish

21 Afterward Jesus appeared again to his disciples, by the Sea of Galilee.[a] It happened this way: 2 Simon Peter, Thomas (also known as Didymus[b]), Nathanael from Cana in Galilee, the sons of Zebedee, and two other disciples were together. 3 “I’m going out to fish,” Simon Peter told them, and they said, “We’ll go with you.” So they went out and got into the boat, but that night they caught nothing.
4 Early in the morning, Jesus stood on the shore, but the disciples did not realize that it was Jesus.
5 He called out to them, “Friends, haven’t you any fish?”
“No,” they answered.
6 He said, “Throw your net on the right side of the boat and you will find some.” When they did, they were unable to haul the net in because of the large number of fish.
7 Then the disciple whom Jesus loved said to Peter, “It is the Lord!” As soon as Simon Peter heard him say, “It is the Lord,” he wrapped his outer garment around him (for he had taken it off) and jumped into the water. 8 The other disciples followed in the boat, towing the net full of fish, for they were not far from shore, about a hundred yards.[c] 9 When they landed, they saw a fire of burning coals there with fish on it, and some bread.
10 Jesus said to them, “Bring some of the fish you have just caught.”11 So Simon Peter climbed back into the boat and dragged the net ashore. It was full of large fish, 153, but even with so many the net was not torn. 12 Jesus said to them, “Come and have breakfast.” None of the disciples dared ask him, “Who are you?” They knew it was the Lord. 13 Jesus came, took the bread and gave it to them, and did the same with the fish. 14 This was now the third time Jesus appeared to his disciples after he was raised from the dead.

MONDAY
May we remind you that the Blessing of the Families will continue this week – please see programme shown in the magazine Flimkien, and also on the website – www.bambinanaxxar.org

7.30 p.m. At parish annexe meeting of the Group “Familji Nsara”

THURSDAY
8.45 a.m. Departure from the parish square for the Pilgrimage to the Convent of St. Rita, St. Julian, and Mass followed by a Coffee Morning. Tickets from the  helpers.

6.00 p.m. Adoration at the parish church by the Group “Kelma tal-Hajja”

FRIDAY
7.30 p.m. At the parish Oratory, meeting for Engaged Couples, who are getting married in the next six months -  this is an essential formation talk for a Catholic Marriage

Thursday, 21st April, 2016 – morning – The Museum male members are organizing a Pilgrimage to the Sanctuary of Mellieha, and entrance through ‘The Door of Mercy’. Any males are invited to attend. Tickets from the sacristy 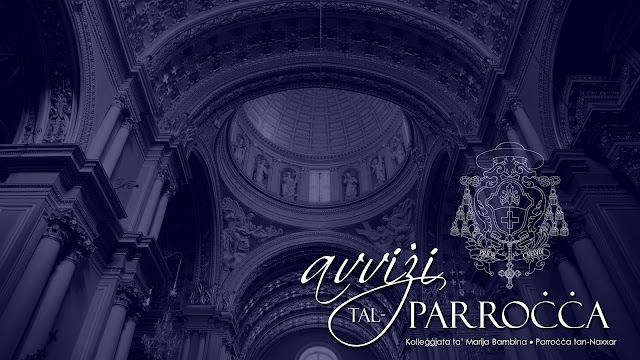 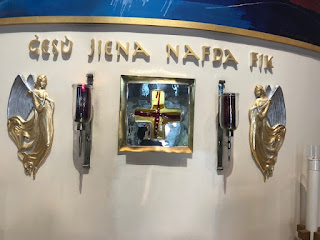